Konsult has touched upon lives of 12000 + creative learners from various parts of the world! They range from a workshop to Advanced level courses including various Multi National Corporations to International Schools!

1000+ Art Works as Study Material for all ages and across all genres developed by experienced Artists.

From creating content, to advising us, training the teacher’s, more than 50 Artist’s have reposed faith on us Pan India!

Courses for a Career in Creative

Online Art Classes and @ Campus Art Classes  –  Structured Art learning program for the little ones. From a 3 year old to 15 year old, Konsult Art has focused learning to enhance the creative quotient of the students. The curated structured course has a well defined progression path 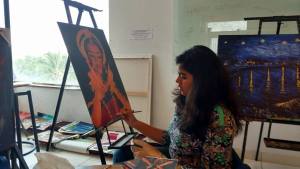 The visual arts are art forms such as painting, drawing, printmaking, sculpture, ceramics, photography, video, filmmaking, design, crafts and architecture. Many artistic disciplines such as performing arts, conceptual art, and textile arts also involve aspects of visual arts as well as arts of other types. Also included within the visual arts[1] are the applied arts[2] such as industrial design, graphic design, fashion design, interior design and decorative art.[3]

Current usage of the term “visual arts” includes fine art as well as the applied or decorative arts and crafts, but this was not always the case. Before the Arts and Crafts Movement in Britain and elsewhere at the turn of the 20th century, the term ‘artist’ had for some centuries often been restricted to a person working in the fine arts (such as painting, sculpture, or printmaking) and not the decorative arts, craft, or applied Visual arts media.

The distinction was emphasized by artists of the Arts and Crafts Movement, who valued vernacular art forms as much as high forms.[4] Art schools made a distinction between the fine arts and the crafts, maintaining that a craftsperson could not be considered a practitioner of the arts.

The Metropolitan Museum of Art in Manhattan. Museums constitute a primary forum for the display of visual arts.

The increasing tendency to privilege painting, and to a lesser degree sculpture, above other arts has been a feature of Western art as well as East Asian art.

In both regions painting has been seen as relying to the highest degree on the imagination of the artist, and the furthest removed from manual labour – in Chinese painting the most highly valued styles were those of “scholar-painting”, at least in theory practiced by gentleman amateurs. The Western hierarchy of genres reflected similar attitudes.

Training in the visual arts has generally been through variations of the apprentice and workshop systems. In Europe the Renaissance movement to increase the prestige of the artist led to the academy system for training artists, and today most of the people who are pursuing a career in arts train in art schools at tertiary levels. Visual arts have now become an elective subject in most education systems.[5][6]

Drawing is a means of making an image, illustration or graphic using any of a wide variety of tools and techniques available online and offline. It generally involves making marks on a surface by applying pressure from a tool, or moving a tool across a surface using dry media such as graphite pencils, pen and ink, inked brushes, wax color pencils, crayons, charcoals, pastels, and markers.

Digital tools, including pens, stylus, Apple pencil that simulate the effects of these are also used. The main techniques used in drawing are: line drawing, hatching, crosshatching, random hatching, shading, scribbling, stippling, and blending. An artist who excels in drawing is referred to as a draftsman or draughtsman.[7]

Drawing and painting goes back tens of thousands of years. Art of the Upper Paleolithic includes figurative art beginning between about 40,000 to 35,000 years ago. Non-figurative cave paintings consisting of hand stencils and simple geometric shapes are even older. Paleolithic cave representations of animals are found in areas such as Lascaux, France and Altamira, Spain in Europe, Maros, Sulawesi in Asia, and Gabarnmung, Australia.

In ancient Egypt, ink drawings on papyrus, often depicting people, were used as models for painting or sculpture. Drawings on Greek vases, initially geometric, later developed to the human form with black-figure pottery during the 7th century BC.[8]

With paper becoming common in Europe by the 15th century, drawing was adopted by masters such as Sandro Botticelli, Raphael, Michelangelo, and Leonardo da Vinci who sometimes treated drawing as an art in its own right rather than a preparatory stage for painting or sculpture.[9] 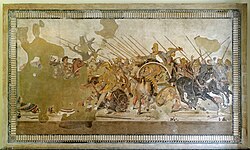 Mosaic of Battle of Issus 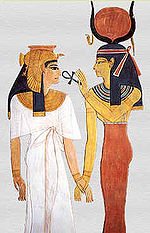 Painting taken literally is the practice of applying pigment suspended in a carrier (or medium) and a binding agent (a glue) to a surface (support) such as paper, canvas or a wall. However, when used in an artistic sense it means the use of this activity in combination with drawing, composition, or other aesthetic considerations in order to manifest the expressive and conceptual intention of the practitioner.

Painting is also used to express spiritual motifs and ideas; sites of this kind of painting range from artwork depicting mythological figures on pottery to The Sistine Chapel to the human body itself.[10]

Like drawing, painting has its documented origins in caves and on rock faces. The finest examples, believed by some to be 32,000 years old, are in the Chauvet and Lascaux caves in southern France. In shades of red, brown, yellow and black, the paintings on the walls and ceilings are of bison, cattle, horses and deer. 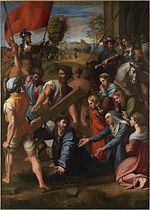 Paintings of human figures can be found in the tombs of ancient Egypt. In the great temple of Ramses II, Nefertari, his queen, is depicted being led by Isis.[11] The Greeks contributed to painting but much of their work has been lost. One of the best remaining representations are the Hellenistic Fayum mummy portraits.

Another example is mosaic of the Battle of Issus at Pompeii, which was probably based on a Greek painting. Greek and Roman art contributed to Byzantine art in the 4th century BC, which initiated a tradition in icon painting.[12]

Apart from the illuminated manuscripts produced by monks during the Middle Ages, the next significant contribution to European art was from Italy’s renaissance painters. From Giotto in the 13th century to Leonardo da Vinci and Raphael at the beginning of the 16th century, this was the richest period in Italian art as the chiaroscuro techniques were used to create the illusion of 3-D space.[13] 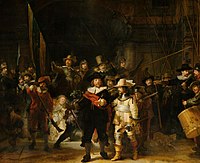 Painters in northern Europe too were influenced by the Italian school. Jan van Eyck from Belgium, Pieter Bruegel the Elder from the Netherlands and Hans Holbein the Younger from Germany are among the most successful painters of the times. They used the glazing technique with oils to achieve depth and luminosity. 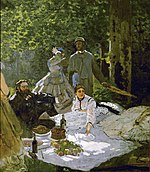 The 17th century witnessed the emergence of the great Dutch masters such as the versatile Rembrandt who was especially remembered for his portraits and Bible scenes, and Vermeer who specialized in interior scenes of Dutch life.

The Baroque started after the Renaissance, from the late 16th century to the late 17th century. Main artists of the Baroque included Caravaggio, who made heavy use of tenebrism. Peter Paul Rubens, a Flemish painter who studied in Italy, worked for local churches in Antwerp and also painted a series for Marie de’ Medici. Annibale Carracci took influences from the Sistine Chapel and created the genre of illusionistic ceiling painting. Much of the development that happened in the Baroque was because of the Protestant Reformation and the resulting Counter Reformation. Much of what defines the Baroque is dramatic lighting and overall visuals.[14]

Impressionism began in France in the 19th century with a loose association of artists including Claude Monet, Pierre-Auguste Renoir and Paul Cézanne who brought a new freely brushed style to painting, often choosing to paint realistic scenes of modern life outside rather than in the studio. This was achieved through a new expression of aesthetic features demonstrated by brush strokes and the impression of reality.

They achieved intense colour vibration by using pure, unmixed colours and short brush strokes. The movement influenced art as a dynamic, moving through time and adjusting to new found techniques and perception of art. Attention to detail became less of a priority in achieving, whilst exploring a biased view of landscapes and nature to the artists eye.[15][16]

Paul Gauguin: The Vision After the Sermon (1888) 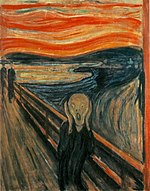 Towards the end of the 19th century, several young painters took impressionism a stage further, using geometric forms and unnatural colour to depict emotions while striving for deeper symbolism. Of particular note are Paul Gauguin, who was strongly influenced by Asian, African and Japanese art, Vincent van Gogh, a Dutchman who moved to France where he drew on the strong sunlight of the south, and Toulouse-Lautrec, remembered for his vivid paintings of night life in the Paris district of Montmartre.[17]

Edvard Munch, a Norwegian artist, developed his symbolistic approach at the end of the 19th century, inspired by the French impressionist Manet. The Scream (1893), his most famous work, is widely interpreted as representing the universal anxiety of modern man.

Partly as a result of Munch’s influence, the German expressionist movement originated in Germany at the beginning of the 20th century as artists such as Ernst Kirschner and Erich Heckel began to distort reality for an emotional effect.

In parallel, the style known as cubism developed in France as artists focused on the volume and space of sharp structures within a composition. Pablo Picasso and Georges Braque were the leading proponents of the movement.

Objects are broken up, analyzed, and re-assembled in an abstracted form. By the 1920s, the style had developed into surrealism with Dali and Magritte.[