To choose your currency option hover around the + sign on the left. Outside India, choose only USD
Skip to content
Sale!

Konsult Baking Course cater to the young who have a liking to baking and cooking. The course focus is on learn, cook and create to explore the world of culinary art!

They will be taught through actions what baking techniques that they will learn in the particular class. The student will bake a dish of the day and share it with their loved ones.

Free Trial Class offered is to understand the nuances and the teaching methodology of our online classes. The participant can attend the first 45 minutes of the class only.

The entire course is hands on and the student’s get our Chef’s guidance to create the wonderful product of the day!

Konsult Baking Class cater to the young who have a liking to baking and cooking. The course focus is on learn, cook and create to explore the world of culinary art!

They will be taught through actions what baking techniques that they will learn in the particular class. The entire course is hands on and the student’s get our Chef’s guidance to create the wonderful product of the day!

Baking Class Online are conducted through web streaming and scheduled as per the chosen slot by the student.
The learning path is same like a normal class. The experience is also exactly like a normal class.
Free course E book (will be sent by mail)
Once you pay for the course, you will be contacted by our Programmes team to fix the schedule.
You can contact Mr.Dass, Manager -Programmes on + 91 9902739994 (10 am to 5 pm IST) for details.

Baking is a method of preparing food that uses dry heat, normally in an oven, but can also be done in hot ashes, or on hot stones. The most common baked item is bread but many other types of foods are baked.[1] Heat is gradually transferred “from the surface of cakes, cookies, and breads to their center.

As heat travels through, it transforms batters and doughs into baked goods and more with a firm dry crust and a softer centre”.[2] Baking can be combined with grilling to produce a hybrid barbecue variant by using both methods simultaneously, or one after the other. Baking is related to barbecuing because the concept of the masonry oven is similar to that of a smoke pit.

Because of historical social and familial roles, baking has traditionally been performed at home by women for day-to-day meals and by men in bakeries and restaurants for local consumption. When production was industrialized, baking was automated by machines in large factories. The art of baking remains a fundamental skill and is important for nutrition, as baked goods, especially breads, are a common and important food, both from an economic and cultural point of view. A person who prepares baked goods as a profession is called a baker.

Eventually, the Roman art of baking became known throughout Europe and eventually spread to eastern parts of Asia. By the 13th century in London, commercial trading, including baking, had many regulations attached. In the case of food, they were designed to create a system “so there was little possibility of false measures, adulterated food or shoddy manufactures.” There were by that time twenty regulations applying to bakers alone, including that every baker had to have “the impression of his seal” upon bread.[6]

Beginning in the 19th century, alternative leavening agents became more common, such as baking soda.[4] Bakers often baked goods at home and then sold them in the streets. This scene was so common that Rembrandt, among others, painted a pastry chef selling pancakes in the streets of Germany, with children clamoring for a sample.

In London, pastry chefs sold their goods from handcarts. This developed into a delivery system of baked goods to households and greatly increased demand as a result. In Paris, the first open-air café of baked goods was developed, and baking became an established art throughout the entire world.[citation needed] 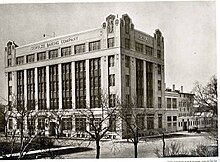 Every family used to prepare the bread for its own consumption, the trade of baking, not having yet taken shape.
Mrs Beeton (1861)[7]

Baking eventually developed into a commercial industry using automated machinery which enabled more goods to be produced for widespread distribution. In the United States, the baking industry “was built on marketing methods used during feudal times and production techniques developed by the Romans.”[8]

Some makers of snacks such as potato chips or crisps have produced baked versions of their snack products as an alternative to the usual cooking method of deep frying in an attempt to reduce their calorie or fat content. Baking has opened up doors to businesses such as cake shops and factories where the baking process is done with larger amounts in large, open furnaces.[citation needed]

The aroma and texture of baked goods as they come out of the oven are strongly appealing but is a quality that is quickly lost. Since the flavour and appeal largely depend on freshness, commercial producers have to compensate by using food additives as well as imaginative labeling. As more and more baked goods are purchased from commercial suppliers, producers try to capture that original appeal by adding the label “home-baked.”

Such attempts seek to make an emotional link to the remembered freshness of baked goods as well as to attach positive associations the purchaser has with the idea of “home” to the bought product. Freshness is such an important quality that restaurants, although they are commercial (and not domestic) preparers of food, bake their own products. For example, scones at The Ritz London Hotel “are not baked until early afternoon on the day they are to be served, to make sure they are as fresh as possible.